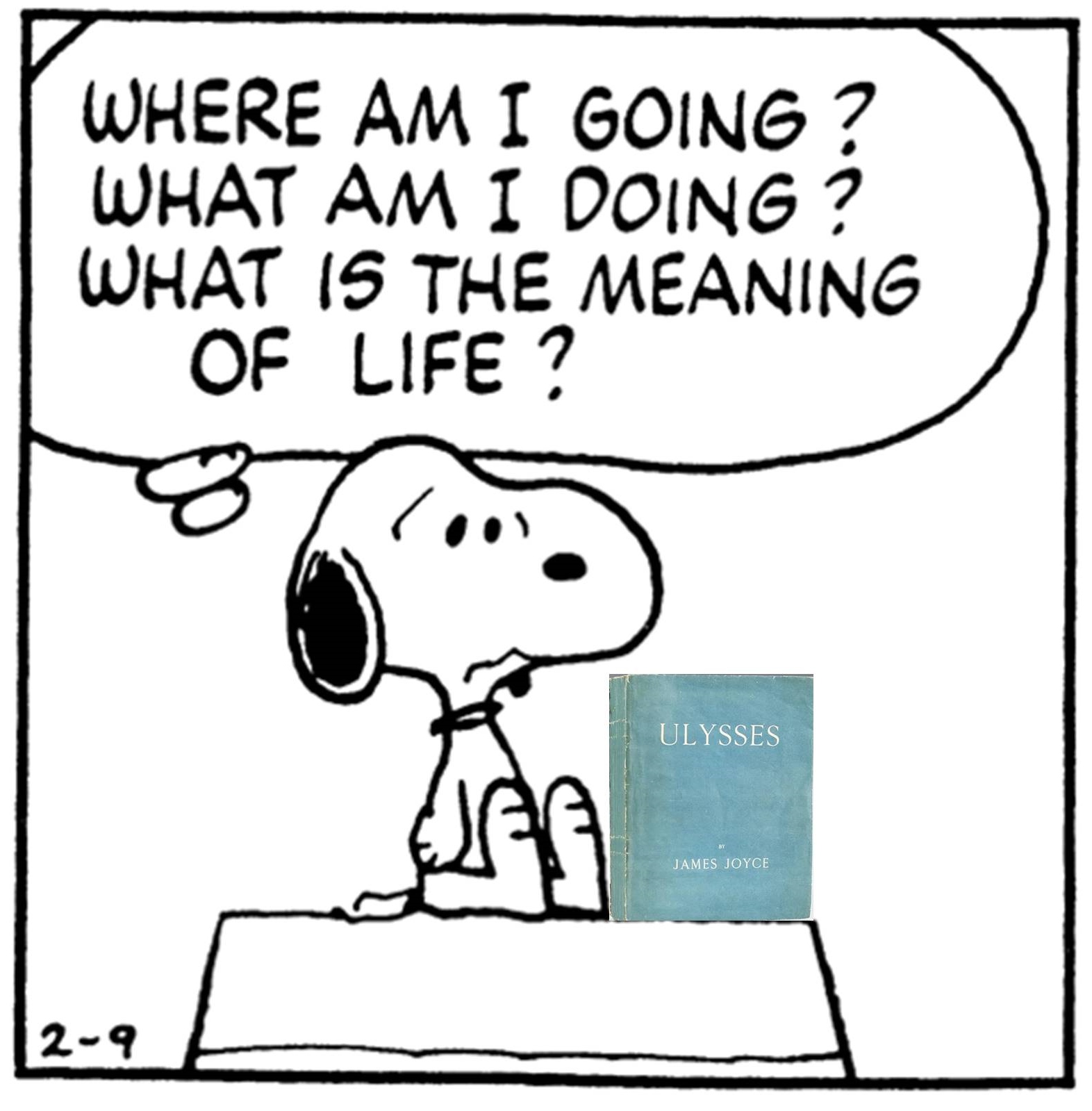 Well, now that the ‘powers that be’ are relaxing (note: not removing) Covid imposed restrictions, one wonders how many more Zoom meetings the FJT Wednesday Group will hold before re-joining the real world and reconvening in Fitzies again. 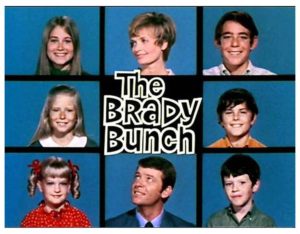 I, for one, hope that we continue for a little while longer in our virtual state. Not only because I have become a confirmed virophobe and semi hermit, but because I would sorely miss the entertainment value of watching Peter Lynch’s beard taking on a life-form all of its own, hearing Olive Rolstone’s voice reverberating and echoing like a rock band in rehearsal and so much more of that which is displayed weekly through the ‘Brady Bunch’ panes on my computer screen.

And, anyways, we’ve barely come to grips with this Zoom technology stuff. This week we were familiarising ourselves with the ‘chat’ facility – adding a whole new dimension to the Zoom experience!

No, friends – let’s keep on Zooming.

This week, we were delighted and honoured to have Robert Walsh (who has guided so many of us through Joyce’s works and made them accessible, comprehensible and enjoyable) deliver some of his thoughts on ‘Ulysses’. 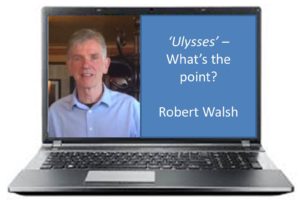 It was clear from the beginning of Robert’s presentation that we were in for a hugely intellectual roller coaster of debate. Especially, when he opened by quoting Basil Fawlty who, like Robert, asked, ‘What’s the point?’

Robert, unlike Basil, was, of course, referring to Joyce’s masterpiece ‘Ulysses’. So, what is the point of Ulysses?

Robert began by outlining his approach.  He would discuss five key aspects of the book (the city of Dublin, the language and the main characters – Stephen, Molly and Leopold) and he would also touch on other writers (Dante, Shakespeare and Homer) on whom the book draws heavily.

Dublin, at the time of Joyce, laid claim to be the 2nd city of the Empire and, yet, had not featured prominently in English literature we were informed.

Perhaps that was one reason for Joyce to set his works here in his birthplace and to attest that, ‘For myself, I always write about Dublin, because if I can get to the heart of Dublin, I can get to the heart of all the cities of the world’. (Mind you, as Robert noted, he also referred to denizens of the city as ‘the most hopeless, useless and inconsistent race of charlatans’).

Whatever the reason, it is clear that Dublin, often itself described as a character in ‘Ulysses’, is detailed with great affection and with great accuracy by our favourite author.

Andrew Basquille and Roland Evans both mused upon Charles Dickens’s use of London as a backdrop to his stories and contemplated the similarities between this and Joyce’s treatment of Dublin.

Robert related how James Joyce, when asked once why he didn’t write an ordinary book, replied, ‘I could do that but what would be the point?’ This brought us to the second part of Robert’s dissertation – the language of ‘Ulysses’.

Robert told us that Joyce, famously unhappy with the mere 200k or so words in the English language, often felt the need to invent more because he couldn’t always ‘find the right ones’.

He described how Joyce had scant regard for punctuation (Joyce once referred to ‘perverted commas’) and how he created a novel which challenged the reader for many reasons – not least the difficulty in separating inner monologue from narrative.

Despite this, Robert said, we are able to distinguish which character is thinking or speaking aloud just by the form and structure of language that Joyce ascribes to them.

On top of this, Robert described how Joyce used language to ‘illustrate’ or enhance the setting or theme of a chapter (viz the ‘news reporting’ style in the Aeolus episode).

Robert then turned his attention to the writers on whom Joyce leaned in terms of anchoring major themes of the book. Shakespeare (and Hamlet in particular) gave us the themes of Father and son, usurpers, betrayal and more. Joyce would, Robert assured us, have been very familiar with Hamlet having lectured on the play on many occasions in Trieste.

Homer’s ‘Odyssey’, of course, provided much to the novel including a structure and even, according to the bard himself, a marketing tool!

Dante was a great influence on Joyce. Not only in his writing but also in his life story and, in ‘Ulysses’, we see many traces of Dante. Perhaps none more notable than the notion of getting even and settling scores! In ‘Ulysses’ Joyce cast Stephen (and thus himself?) as the Irish Dante.

Robert went on to describe the key characters of Joyce’s Ulysses and provided us with terrific insights into their fictional characters and the real life people who inspired them.

We were introduced to Molly. A simple uneducated woman who enjoys trashy literature but also displays an enormous emotional intelligence – especially evident in the Penelope episode. Robert provided various facts on her introduction to Bloom and her marriage to him at an early age.

Stephen is a young intellectual recently returned from Paris to attend at the death of his mother. A struggling soul, Stephen is despondent, homeless, wracked with guilt and looking for some meaning to his existence – ‘Is there anyone out there?’

Bloom was discussed by Robert mostly in terms of his relationship as a pseudo father figure to Stephen.

A subconscious need in Bloom to find the son lost to him (Rudy), in the book, overlaps with a period of Stephen’s physical (and emotional?) vulnerability. The two men (Joyce the younger and older) have little in common but circumstance throws them together as Bloom follows and rescues Stephen from himself. Robert spent much time focusing on the Circe, Eumaeus and Ithaca episodes to explore the relationship between these two men.

So, after Robert’s enlightening tour of some of the key aspects of ‘Ulysses’, were we any closer to a conclusion? 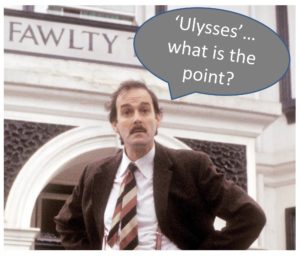 What, indeed, is the point of ‘Ulysses?’

Well, that was discussed by the group at length after Robert’s wonderful dissertation.

Perhaps the wonderfully talented and handsome, James Holahan, put it best when he stated that the point is… ‘Whatever you want it to be’.

James, himself, stated his current belief that ‘Ulysses’ is a love story á la ‘Mills and Bloom’ (as he unintentionally punned) but with a real and altogether messier plot.

James was immediately challenged and ridiculed for his lack of familiarity with Mills and BOON but he remains, I am reliably informed, quite proud of his ignorance of this particular subject matter.

Robert Walsh agreed that the point of ‘Ulysses’ is that it can have a different point in the minds of its readers. Each individual can take one or more meaning depending on their interpretation or, indeed, on their circumstances or mood at any given time in their lives.

It was once remarked of ‘Ulysses’ that it is a book to be read every decade. Not, of course, that the book will have changed, but that its reader will have a different interpretation as their life experience has developed and their thinking changed over time.

It may well be that it is the complex and varied themes incorporated into the book that facilitate this phenomenon that make it such a magnificent piece of literature and that, perhaps, is…

…the real point of ‘Ulysses’! 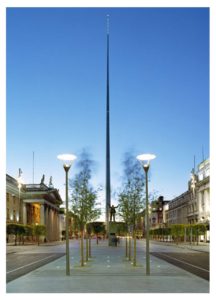 Naturally, the Zoom meeting did not end with this conclusion. Other crucial matters were discussed.

Philip Pearson mentioned the petition to erect a statue to Bloom. This lead to a discussion on the Dublin Spire with Olive Rolstone commenting that, when the scaffolding was first removed from said edifice, some Dublin wag remarked, ‘I can see Cleary’s now the cranes have gone’ (you’d have to know Dublin as well as Jimmy to get that joke!)

Andrew Basquille recommended that we listen to the Blooms & Barnacles Bloomsday Ulysses podcast reading which features some FJT input (Andrew, Joe Gallagher and Kevin O’Doherty to mention a few). He also urged the reading of ‘Joyce and Dante – The Shaping Imagination’ by Mary T Reynolds. 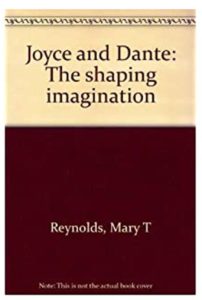 Andrew announced that the wonderfully talented and handsome, James Holahan, was the winner of a major Joycean competition that was run via the Zoom ‘chat’ function. James is currently deciding whether to choose an all-expenses paid holiday or a luxury car as his prize.

Thanks Robert Walsh for a most engrossing, entertaining and informative session. You promised, at the beginning, not to waffle and you most certainly did not! We, the assembled Zoomers, hung on your every word! You were terrific as always.

Thanks, again, to Andrew for organising and hosting the session.

As our country emerges slowly from shutdown, please remember that restrictions are relaxed and not removed.