The JTM CLG receives the key to the Tower 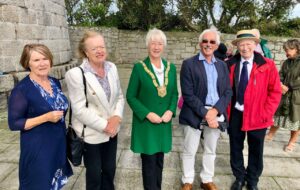 The Joyce Tower & Museum CLG receives the Key to the Tower

Frank Cogan’s speech marked the significance of the occasion

I have great pleasure in welcoming the Cathaoirleach of Dun Laoghaire Councty Council, Cllr Mary Hanafin, to the James Joyce Tower for this ceremony today in which the key to the Tower is symbolically handed over to the Joyce Tower and Museum Company.

I wish to thank the Cathaoirleach and the Council for their vision and generosity in delegating responsibility for the day-to-day management of the Tower, under licence, to the JTM CLG and thus establishing a partnership arrangement which we hope will provide a framework of trust and cooperation which will prove to be mutually fruitful for the months and years to come. This step forward is the culmination of a long process going back many decades, back to the days of Sylvia Beach and Michael Scott, when the importance of the Tower as both a centre and a symbol of the significance of Joyce in world literature, as well as in the culture of his native city and country, was first recognized .

In later decades, when Failte Ireland had taken charge of the Tower, its care was entrusted to some highly gifted curators – such as Vivien Igoe and Robert Nicholson – who contributed enormously to the reputation of the Tower by building up its profile as literary museum and expanding its collection of archival material and artefacts. In more recent times, when financial constraints made it difficult to keep the Tower open to the many thousands of Joyce enthusiasts from all over the world who wished to come to visit it, people like Vincent Browne and the group of Volunteers which became known as the Friends of the Joyce Tower offered their services to act as custodians and guides, rostered seven days a week, 365 days a year, on a voluntary basis. This enabled the Tower to flourish as never before as an important destination for tourists as well as a centre for the celebration of Joyce and his place in Irish literary and popular culture through Bloomsday events and other Joyce-fests such as this year’s homage to the centenary of the publication of Ulysses.

I wish to convey to Julie Larkin, the Chairperson of the Friends of the Joyce Tower, our appreciation for the magnificent work of the Volunteers and for their enormous contribution to the raising of the profile of the Tower to its current status as an international cultural icon. We all hope that this cooperation between the local authority, the JTM company and the Friends will continue to act as a dynamic force for the improvement and development of the Tower as a major international cultural centre in this new departure upon which we have now entered.

Although Joyce only lived in the Tower for five days – from 9th September to the 14th  in 1904 – and was not very much at ease in the company of his two co-habitants here, by all accounts, it made an indelible impression on his artistic imagination. It became the omphalos – the navel – the symbolic life-centre here on the curve of the bay; here is set the first chapter of Ulysses, looking out from the top of the Tower at the bay below and looking directly across to the heathery hill of Howth, where the life-cycle of the day concludes as the scene for the amorous excursion of Molly and Leopold, as described in detail in Molly’s stream of consciousness in the final chapter – Alpha and Omega combined in one perspective.

According to the records, the rent for the Tower – paid by Oliver St John Gogarty – for the year was £8 sterling, payable in four quarters, to the Secretary of State for War. That would be the equivalent of about €9.20…….!

However, the indexed purchasing power of €10 in 1904 would be more like the equivalent of €1500 today – a sum which would not seem unreasonable now if we had to hand it over to the DLRCC in return for the key to the Tower.

But – happily – we live in a different world now, in which the local authority , as a patron and promoter of local cultural initiative, is our partner, not a mere landlord, and we can look forward to a new era in which we can bend our efforts jointly to create a new synergy and to avail of a thriving creative space in which all lovers of Joyce can enjoy his creative legacy, in which Ulysses has finally come home to his omphalos across the wine-dark sea.