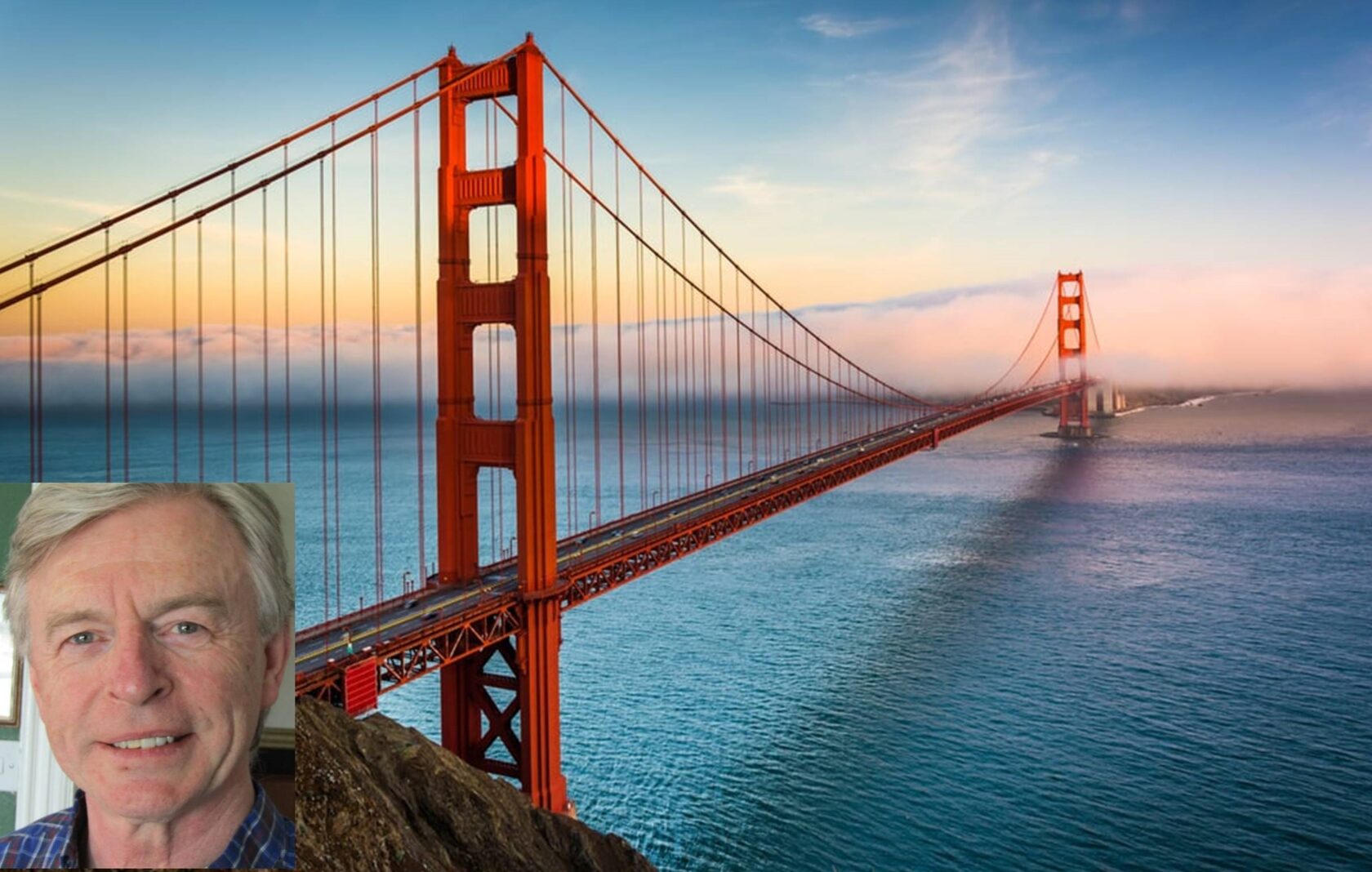 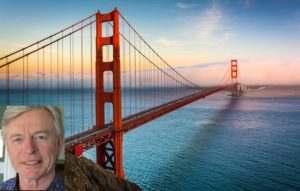 Don’t do it Andrew. Don’t Jump!

Oh my Gosh! My heart is in my mouth. How did he get there what with the travel ban an’ all? But there he is and in a frightening and precarious situation.

Don’t Andrew – think about your friends.

Surely San Francisco is further from Andrew’s gaff than even the extended 5 kilometre limit would allow. And yet, here he is, in front of our eyes, standing atop the Golden Gate Bridge… about to…

Wait, what is this trickery? Suddenly, Andrew is back in his room and safely positioned in front of his (now well-stocked) bookcase.

‘I’m trying the background feature of Zoom’, he explained cheerily. ’It allows me to appear in front of a backdrop of my choosing’.

The collective onscreen relief is immense – ah, the wonders of this Zoomy thingy are, quite simply, boundless.

Last Wednesday’s Zoom session was brought to us by Anne-Marie MacGoris and was entitled ‘Grammar vs Description’.

Anne-Marie chose to read an excerpt from Seán Ó Faoláin’s ‘A Nest of Simple Folk’ which he wrote in 1933 and is a novel divided into four sections. Anne-Marie provided a bit of the writer’s background before reading from the first section ‘The Will’.

(Ó Faoláin, formerly, John Francis Whelan, was born on 22nd February, 1900 and died on 20th April, 1991. He received M.A. degrees from the National University of Ireland in Dublin and Harvard University, USA. He wrote eight volumes of short stories, four novels, three travel books, six biographies, a play, a memoir, and even a history book. He also contributed many articles, reviews, and short stories to periodicals in Ireland, Britain, and America). For more info, click on the wikipedia icon below:

Anne-Marie used the author’s account of the bleak and cold farm (Foxhall), the fictional setting of the novel’s opening, as an example of Ó Faoláin’s superbly crafted descriptive technique.

‘You can check your grammar with apps like ‘Grammarly’’, she attested,’ but there is no app to deliver a writer’s visual and descriptive powers’.

After her terrific introduction, Anne-Marie began a discussion on the relative importance of proper grammar vs well-honed descriptive skills for writers.

Well, such was the level of member participation and debate; she may as well have started a war!

Andrew Basquille was first off the blocks pointing out that Ó Faoláin demonstrated both grammatical and descriptive skills in abundance. Anne-Marie agreed.

James Holahan referenced James Joyce stating that, whilst his grammar was unconventional, no one would dispute his ability to describe the places, thoughts and characters populating his works. Conor O’Toole mentioned the letters of Nora Barnacle as displaying an even greater abandonment of the rules of grammar.

Pat Crowley quoted Ó Faoláin as saying ‘the Irish don’t look up, they look forward’. This led to a review of some of the places that the author had lived. From Cork to South County Dublin (clearly a rise in social status Pat?).

Anne Hughes spoke of knowing Ó Faoláin’s son Stephen whom she described as very charming but less frequently referenced than his daughter Julia who (like her father and mother Eileen Gould) became a writer of note.

Liz McManus spoke of her admiration for Ó Faoláin as a political activist mentioning, among other things, his belief in the separation of church and state. 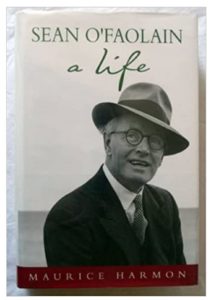 Then, suddenly, we were off on a splendid journey of collective stream of consciousness with what was surely one of the group’s most animated discussions to date.

During the session, many other authors and their works were referenced such as Frank O’Connor’s ‘First Confession’ which Maggie FitzGerald lauded as an account of this experience which could be easily lived through the writer’s description.

Julie Larkin encouraged us to revisit the wonderful textbook ‘Exploring English’ for some good examples of descriptive writing. Mary Milne informed us that this book was republished recently.

Kieran McBride referenced three writers who, in his opinion, were heavily influenced by James Joyce; Frank McCormac, Emer McBride (any relation?) and Anna Burns (whose life, Liz McManus opined, bore some similarity to that of Joyce).

Philip Pearson, controversially, questioned whether a book could be too descriptive and that too many adjectives could be off-putting to younger readers who just want to get on with the plot!

At this point, things got a bit crazy as the talk moved to the subject of the importance of grammar in writing. Do writers need to understand good grammar before abandoning it (like artists who learn basic techniques) or can we forgive our favourite writers when they ignore ‘correct’ syntax and punctuation?

Heinz Lechleiter (who, inexplicably, had promised himself to refrain from commenting) guided us through entertaining personal insights into language and writing.  He spoke of children learning grammar phonetically before learning how to write. He talked about the spoken word and how it can sometimes lack structure and he used telephone transcripts to illustrate how communication can appear rather strange when written down verbatim.

It was Heinz who really got us going by mentioning the misuse of the word ‘lesser’ instead of ‘fewer’ when describing numerical deficiency. 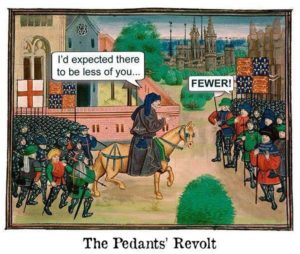 Well that set the cat among the pigeons.

Roland Evans bemoaned the decline of the comparative – the elder, not the oldest of two!

Who makes the rules? The Queen’s English! English is a b***ard language were some of the themes explored enthusiastically by the group.

The origins of various grammatical (mis)uses were explored including the residual Irish language tense which, in translation gives us the ‘I do be…’ tense.

The importance of the spoken tradition became a topic for a while and we wondered at its role in the setting of the rules of grammar.

Julia Beckett was able to inform the group that Homer’s writing used a language that was not of the time but, rather, a mix of different dialects. 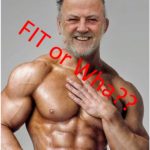 This brought us to a discussion of the continuing evolution of language. We spoke of expressions like ‘fit’ and its modern interpretation and there was some mention of transatlantic differences and understanding. Apparently ‘does anyone want my cherry?’ can be interpreted as an offer of something other than a tasty fruit.

Finally, after being introduced by Maggie FitzGerald, Christina Abaca from Argentina very kindly expressed her pleasure at being a part of the Wednesday Zoom group and she described us, rather flatteringly, as ‘intellectuals’.

Well, I’m not sure about that Christina but it certainly was a very engaging, stimulating and lively Zoom session. I know that I have only captured a small part of it in this report. Apologies to those whose contributions I have omitted. This report would become far too long and use far too many words were it to capture all the input from the group. Better to use fewer words I hope you’ll agree!

Many thanks Anne-Marie for your reading and for facilitating us in this wonderful debate – a terrific relief from our Covid isolation. And thank you, as always, Andrew for organising it.