Heinz Lechleiter takes us on a Magical Mystery Tour

It must be noted that, as our prowess at this Zoom app thingy continues to reach ever higher standards, so too does the quality of our pre-session chitchat.

With other members noticing the various alarming and deteriorating coiffure among fellow participants as they switched on their cameras, last week’s greetings quickly moved onto a lively discussion on the challenges of self-grooming in general, and hair-care in particular, during our Covid-19  isolation.

Some of us clearly preferred a laissez-faire approach to our lock-down locks and sported three-month-old unkempt and windswept manes. It made us appear simultaneously interesting, brooding and quite frightening to young children and to small animals.

Others took more extreme action and appeared with tightly shorn heads as though they had been recently released from a local penitentiary or other such institution.

For the latter it was clearly a case of ‘Never mind the Buzzcuts’!

For some reason, these two wildly differing approaches seemed the only options explored by our faithful Wednesday Reading Group Zoomers. Whatever happened to the middle ground? Have we lost all sense of equilibrium? Or am I being unreasonable – perhaps even splitting hairs?! 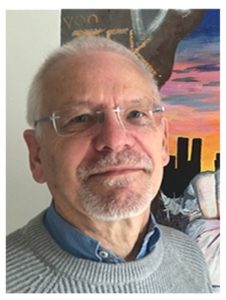 At any rate, all thoughts of hair-styling were banished as Heinz Lechleiter embarked upon a promised ‘Magical Mystery Tour’ which was all about language, its purpose and its usage.

Having firstly attested that ‘all literature is derived from the word’, Heinz addressed 3 talking points. These were: Living between Languages, Language and thought and The limitations of language.

Dealing with the first on his list, Heinz shared his thoughts on something he has in common with our favourite author, James Joyce. He is, as Jimmy was, living between languages. That put him in a position of linguistic empathy with the bard.

He mentioned some of the challenges for those living between languages and searching for the right words or expressions. In translating ‘Finnegans Wake’, for example, Joyce must have been baffled by the fact that there were three ways to describe a kiss in Italian while, for English speakers, there is only one way to do it! (Is it any wonder that the Italians are renowned romantics?)

Indeed, some languages find the need to borrow from others because they don’t have an appropriate word for a particular situation in their own. Heinz illustrated this by using the word ‘Schadenfreude’ which we, of course, stole from his native tongue. ‘This word does not mean that only Germans feel this particular pleasure at the misfortune of others’, Heinz assured us without conviction.

Heinz, then, urged us to google ‘untranslatable words’ for more examples – I did and it’s fascinating!

Then, as is wont to happen at these sessions, we were off on a journey of exploration where Heinz treated us to other observations on living between languages including the different ways in which words can be ordered within sentences. ‘One who deeper thinks’ (from ‘Finnegans Wake’) is a German not an English construct.

Heinz discussed Esperanto and other universal languages as well as diverging to speak of language as an act of oppression – sadly, something all too familiar to an Irish audience.

‘Wakese’ (the language of Joyce in ‘Finnigans Wake’) was discussed as perhaps an attempt at the creation of a universal language only to be then dismissed as having insufficient vocabulary and pattern.

In the discussion of the second talking point, Language and Thought, we explored the notion of ‘cloitheiring’ or dressing our thoughts in words. We looked at many interpreters of this view hearing Heinz reflect upon the words of the 4th Earl of Chesterfield (Philip Stanhope), Samuel Johnston, Ludwig Wittgenstein, George Orwell, Nietze and many others.

(Note: Ironically, the 4th Earl of Chesterfield once said, ‘When we can’t think for ourselves, we can always quote’).

Finally, we were brought to a conclusion by Heinz when he ended his talk with a summary of how we might overcome the limitations of language and avoid some of the risks associated with its limitations.

Inner thinking (e.g. Joyce’s inner monologues) offered some solution where we could enter the mind of another and explore their thoughts without the barrier of language.

In the open discussion which followed language was discussed from many angles.

Philip Pearson made things political when he wondered how a certain president, a barely articulate individual who rarely speaks in full sentences, could trick his base into admiring him for how ‘he tells it as it is’ when asked the reasoning behind their support.

Liz McManus spoke of language and its importance in communication in all aspects of life, personal, Social and political.

This prompted James Holahan to ponder (rather blasphemously in this group) as to whether ‘Finnegans Wake’ represented a failure for Joyce as it was so difficult to understand and could be described as a poor attempt at communication.

Ned Sullivan contended that St Augustine had labelled all language as ‘a poor form of communication’.

Zan O’Doherty compared reading ‘Finnegans Wake’ to listening to the sea. Sometimes it is not necessary to fully understand something to enjoy the experience of it. One doesn’t have to understand music composition to appreciate a beautiful song.

There was some debate on the emphasis of critical thinking vs grammar especially in teaching younger students.

A former teacher in the group reminded us of the five types of comprehension Aesthetic, Argument, Narration, Persuasion and Information which are still taught to secondary school pupils today.

Anne Hughes spoke of non-verbal communication (body language) and also described how we can think in pictures and not in words.

And then, before we knew it, the session was over. 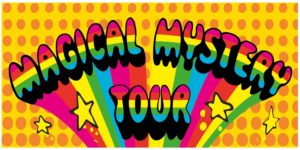 Thanks Heinz Lechleiter for taking us on a truly mind-blowing Magical Mystery Tour. I only wish that I could find the language to adequately express our gratitude to you for a terrific Zoom session. Thanks also to Andrew (of the flowing locks) for organising it. It was yet another great exercise in staying connected during this wretched pandemic.

Until next time, stay safe.